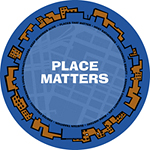 The ceremony on June 11, 2008 at the Municipal Art Society was a sold-out success, featuring 10 great honorees, music by renowned cuatro player Yomo Toro, a wonderful talk by New York Times reporter David Gonzalez, and, as icing on the cake, a proclamation from City Council member Rosie Mendez declaring June 11, 2008 “Place Matters Appreciation Day.” Mendez commended the project for “work that refreshes our own ideas about our city and ourselves.”

We hope you were there with us, but if you couldn’t be, we’ve posted some of the highlights.

Listen to Opening Remarks by David Gonzalez, The New York Times, who talks about one particular block in the Bronx that nurtures memory and community. Link to the 10 min. podcast, or download it with iTunes here.

Made possible by the American Express Historic Preservation Fund

Federation of Black Cowboys for keeping our city surprising and distinctive

Federation of Black Cowboys members are dedicated to teaching city kids the fundamentals of horsemanship and the history of Black cowboys in the American West. Since 1994 they’ve been practicing these arts at Cedar Lane Stables on land leased from the Parks Department. The members come by once or twice daily to feed and groom upwards of 40 horses. The cowboys ride publicly at high-profile parades and marches, including the African American Day Parade in Harlem and the Macy’s Thanksgiving Day Parade, and hold semi-annual rodeos. They also offer field trips, barn tours, educational activities, and riding lessons, and are particularly proud of their successful “high risk” program with the Board of Education. The 2008 rodeo begins tomorrow! June 12, 13, 14. For rodeo information, call Earl Washington or CC at the numbers below.

The premier not-for-profit industrial developer in NYC, GMDC has rehabilitated five vacant North Brooklyn manufacturing buildings for occupancy by small manufacturing enterprises, and is currently in construction on a historic spinning house. Rehabilitation of the buildings has brought online more than 700,000 square feet of space for more than 100 tenants, resulting in the preservation and creation of more than 500 blue collar jobs. The first and largest project was the gut renovation of the former Chelsea Fiber Mills complex, which the City took over in a tax foreclosure in the 1970s. A collaboration between a nonprofit, existing tenants, the City, and local elected officials, the project involved GMDC’s purchase of the complex in 1994. As the New York Times reported, “Every time you open a door, it’s a new story. You could wander in here for a week, and every person you meet is speaking a different language and doing something different.”

JCR Percussion, owned by Calixto Rivera, is where many Latin musicians buy the percussion instruments which form the rhythmic backbone of Latin music. There is no other establishment like it in New York City. In a small unassuming workshop not far from Yankee Stadium, Caly, as he is known to his customers, makes his instruments by hand — cowbells, congas, bongos, timbales, among other instruments. Before he established his shop almost 35 years ago, Latin musicians were in a quandary about where to get something like a good cowbell. In fact, it was this instrument in particular that prompted Caly to start his business, and it remains his signature item. Caly doesn’t advertise his wares; word-of-mouth keeps him busy. Musicians come to him from all over the world to place new orders or repair broken instruments.

Created in 1976 as La Plaza Cultural, this is a storied place, known for its large and lovely garden (26,000 s.f.), and as a performance space for amateurs and professionals. Once buildings stood on-site, but the burning and devastation that swept the Lower East Side in the 1970s left only a rubble- and garbage-strewn gap. CHARAS and other community members and activists cleared and reclaimed the lot. Mavericks like architect Buckminster Fuller, artist Gordon Matta-Clark, and Green Guerillas founder Liz Christy helped local volunteers seed the garden and build the public plaza. La Plaza is botanical marvel, bird habitat, and community center all in one. After skirmishes with development over the years, the garden is now protected and part of the NYC Parks Department. In 2003, its name was changed in memory of CHARAS founder and community leader Armando Perez.

Mandolin Bros. for turning a small business into a destination

Mandolin Brothers of Staten Island is home to an outstanding collection of the world’s finest guitars, banjos, mandolins and ukuleles. Many consider it to be the center of the American fretted instrument universe. Customers travel to Forest Ave. from all points on the globe. Stan Jay and Harold “Hap” Kuffner founded the place in 1971; Jay has been the sole proprietor since 1982. Everyone who visits the store is invited to play all of the vintage, used and new instruments in stock – some of them quite valuable. Customers are also welcome, says Jay, to “ask up to 1 million questions.” Their “mandolin and banjo” room boasts not only a fantastic selection of instruments, but one of the best natural reverberation chambers around — the banjos “resonate” in concert to provide unparalleled echo!

One of the city’s great charity stories is the bequest of Manhattan farmland to create a Sailor’s Snug Harbor for “aged, decrepit & worn out sailors.” The valuable gift purchased 130 beautiful Staten Island acres, and in 1833, the first generation of sailors moved into magnificent buildings by architect Minard Lafever and others. Skip forward to the 1970s. To retrieve some 80 acres of woods, streams and meadows, sold by Sailor’s Snug Harbor to a residential developer, New York City purchased the property as parkland. The remaining portion of the site was acquired by the city as the Snug Harbor Cultural Center, a fascinating preservation story, starring the new Landmarks Preservation Commission, the Municipal Art Society, and many others. Today, the Snug Harbor Cultural Center hosts landmarked buildings, the remarkable Chinese Scholar’s Garden, Staten Island Botanical Garden, Noble Maritime Collection, Staten Island Children’s Museum, and the Staten Island Museum.

In 1994, Bronx residents Maria Torres, Paul Lipson, Steven Sapp, and Mildred Ruiz founded The Point to organize for comprehensive revitalization, and social and economic justice in the surrounding Hunts Point neighborhood. With shared experience working at a local settlement house, the founders determined to make a difference in the lives of local youngsters by offering a rich array of arts, environmental, and business-oriented programming. What has been accomplished is remarkable. In two, creatively re-used industrial buildings (one now designated as a landmark), after-school programs, theater and dance troupes, photography and art programs, advocacy and planning initiatives, environmental justice efforts, and much more, all thrive.

339 Lafayette Street is best known as home to the War Resisters League, the oldest secular pacifist organization in the country, founded 1923. In 1969, the League bought this three-story building at the corner of Lafayette and Bleecker to secure a place for itself and other like-minded groups. In 1974, activists from the League helped establish the A.J. Muste Memorial Institute to carry on the legacy of pacifist leader A.J. Muste. The League transferred the building to the Institute in 1978. Here, in the “Peace Pentagon,” progressive groups plan for social change in deeply discounted office space made possible by higher rents charged for ground-floor storefronts. In addition to the League and the Muste Institute, the building houses the Women’s International League for Peace and Freedom, Metropolitan Council on Housing, Paper Tiger, Deep Dish Television, and other groups.

Four wood-frame houses on the former Hunterfly Road are the last remaining residential artifacts of a nineteenth-century African American community, built in the years of slavery’s demise in New York. The community was named for James Weeks, an African American who bought a parcel of Brooklyn land in 1838. The late, remarkable Joan Maynard led the struggle to save the houses and obtain landmark status. The houses were completely restored in 2005 to three different time periods – the 1870s, 1900, and 1930s. The organization is now constructing a new Education and Cultural Arts Building to enhance its programming and strengthen it mission and vision to be a cultural nexus rooted in historic preservation and African American history – one that offers socially conscious programming that responds to the needs and interests of visitors and neighborhood residents.

This basketball court, at the corner of West 4th St. and 6th Ave., draws basketball lovers from around the city, and even around the world. They come to a court just half-regulation size — literally encaged by a 20-foot high chain-link fence — to play ball and watch some of the best street basketball there is. During the summer months, “The Cage,” as the court is known, hosts the West 4th St. Pro-Classic League. Started during the Lindsay years and sustained by volunteer commissioners, the League is the oldest summer-basketball program in NYC. This year’s season started in late May with four teams. The Cage is a training ground for those who may eventually make the jump to the pros, but also a place where amateurs who love the game can play at the highest level. Operated by the Parks Dept., the courts also host a vibrant handball scene.

All of these wonderful places need your support and patronage to thrive. We have included contact information to encourage you to get to know them and support them as often as you can.

To learn more about our other programs, select from the links to the left. For info on our place-marking efforts, choose Cultural Initiatives.