Find this inconspicuous garage on a suburban street in Flushing, surrounded by row houses with chain-link fences and gardens, and rent a bow, arrows, and a quiver. Take your place among the bow-hunters in camouflage, shooting at a projection of game: deer, bear, moose, rabbits. Don’t be intimidated; raise your bow and aim, focus on your breath, gauge the tension of your fingers on the arrow, and let your worries dissolve for an hour or so as you lose yourself in the rhythms and focus of repetitive precision. 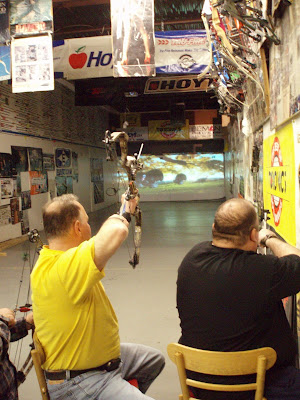 Bow-hunting may not be every New Yorker’s cup of tea. It’s illegal in the five boroughs of New York City (the recent arrow shooting of a Bronx woman notwithstanding: http://tinyurl.com/cwjfyk). But, as they say, if you can find it anywhere, you can find it here.

During the bow-hunting season, which runs from October through December in the New York metropolitan area, most of the league members hunt in Long Island or Westchester, where rifle hunting is not allowed. The league is also an opportunity to swap hunting tips, prime game-spotting sights—and, of course, stories. At the moment all the members are men (including some fathers and sons), though women are encouraged to join.

Martha Lizzio, the owner of Queens Archery, and her husband, Al, got the idea for their virtual bow-hunting league fifteen years ago. They acquired their first images of wildlife by surreptitiously photographing the dioramas at the American Museum of Natural History. Like a seasoned hunting team, Martha kept watch for security guards while Al snapped the shots. Back in Queens, the Lizzios converted the photos into slides, which they projected on the white back wall of the range, carefully lining up the animals’ vital organs with the soft target spots built into the wall. Now they’ve gone digital, and Al downloads and adapts the pictures on his computer. The animals don’t move or make noises when shot (as they do at certain other shooting ranges, like the small range in the L.L. Bean store in Freeport, Maine), but the images of turkeys beneath fall foliage or wolves prowling frozen tundra are realistic enough to bring out the latent hunter in these men. The Lizzios have also set up a wooden scaffolding in the range to simulate a tree stand, so the hunters can practice shooting from different heights. Such is these men’s skill that after the image fades, one can see almost all the arrows clustered in the same spots on the wall. 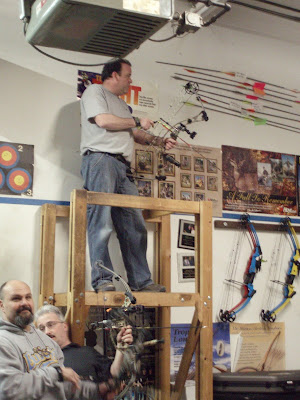 At Queens Archery, the smell of Entenmann’s coffee cake and fresh-brewed coffee might not compare to autumn leaves and doe-in-rut buck lure; the sound of Lite FM might not summon that first crack of a twig that signals the approach of prey; the dry snap of pulling an arrow out of a wall might not compare to the pride and gratitude of extracting an arrow from the still-warm body of an animal. But the dozen or so men and boys who don their jeans and T-shirts (SPORTSMEN DON’T MESS WITH THE BEST; WHITETAIL HERO; HUNTING FOCUS), dust off their arrow cases, and converge each Thursday night are a testament to the determination of New Yorkers to conjure any world the city is lacking, and that “if you build it, they will come.”