The day before Thanksgiving, I decided to whet my appetite by going on the “nature walk” at the Newtown Creek Sewage Treatment Plant. Newtown Creek separates Brooklyn from Queens, and is one of the most polluted industrial sites in America, containing raw sewage, toxins, and oil that has seeped into the waterway from a massive oil spill beneath Greenpoint. 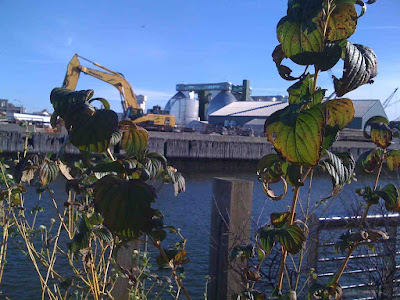 This fact apparently inspired artist George Trakas, who designed the trail, but navigating the quarter-mile of cement and steel made me sad more than anything else. Trakas put so much tenderness into his design: handicapped accessibility, plaques beneath each plant detailing its historical uses, plenty of spots for silent contemplation, graceful and sturdy construction echoing the themes of boats and water, even a fragrance garden and an etched path for raindrops to simulate the creek’s flow. But these details were so overwhelmed by the stench, the sludge, and the inescapable sound track of industrial churnings that I couldn’t help but wonder if Mr. Trakas’s elegant vision wasn’t really a giant wink at the prospect of such a polluted waterway ever becoming a nature sanctuary. 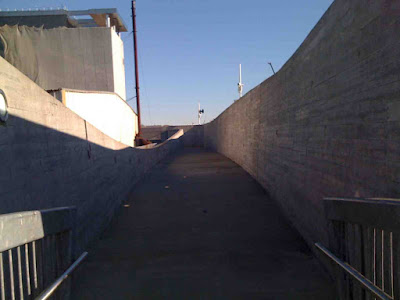 The trail begins at the corner of Paige Avenue and Provost Street in Greenpoint, otherwise an industrial no-man’s-land. Two boulders mark the entrance, and painted fish on the sidewalk lead you past a Time Warner Cable facility to a steel gate, which “has a wave shape to mimic the movement of water.” (A wink here, surely, as Newtown Creek is notoriously stagnant.) Once through the gate, there’s a choice: to a “fragrance garden,” or to the trail. It being November, there were no fragrant plants to mask the sewage reek. On the bridge, made to mimic a ship’s hull, portholes offered views of pipes and helmeted workers, and a distant church steeple. A loudspeaker bleated, “Time out! Time out!” 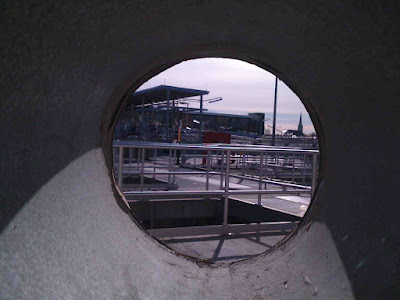 A walkway with jaillike cement and steel-bar walls abutted an asphalt factory, where I detected my first glimpse of nature in some scruff grass. It ended in the so-called “blooming lily,” a rotunda with a tree, benches, and steps leading right into “the placid waters of Newtown Creek.” The bottom few steps were rimmed with slime. I sat on a bench and watched a crane lift automobile carcasses and drop them onto a barge. Nearby I noticed an emergency call box, a “trash barrel” (representing Greenpoint’s cooper heritage), and a water fountain (what would spurt out if you pressed the button?). A brisk breeze ruffled the water. Seagulls swarmed in the scrap-metal dust.

The most impressive part of the walk is the gated “Whale Creek Path,” at the end, which features weeping willow trees, kayak landings, and a picnic bench affording a view of the gleaming onion domes of the plant itself. Next to a warning sign about a raw-sewage discharge point, a bayberry bush was planted (“Aromatic wax on berries rendered into sweet-smelling candles,” read the plaque). In the distance, the Pulaski Bridge hummed and arced against the Manhattan skyline, and a billboard for the Shriners Hospital asked, If you could improve a life, would you? If you could change a creek, would you? Yes, and yes! the native plans answer, but there’s no one but me around to hear them.