The mind-altering experience of Dream House, a “sound and light environment” in a Tribeca loft, begins before you enter and continues well after you leave. As soon as I was buzzed through the door of 275 Church Street and began the climb to the third floor, I heard the humming, felt the pulsing, smelled the incense, detected a pink cast to the stairwell light. 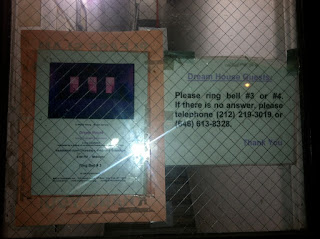 At the top, I removed my shoes and set them beside a Penguin Classics tote bag, a tweed hat, an overcoat, and a pair of battered shoes. I imagined a lone professor bumbling about inside. Instead, when I stepped through the door into the violet light and trancelike sounds, I saw a lithe young couple embracing, surrounded by dingy pillows strewn across a musty wall-to-wall carpet. I felt as though I’d entered the bedroom of a rebellious teenager. 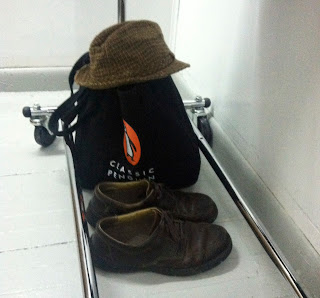 Behind them, windows covered in magenta gels tinted the city skyline pink. An altar featured a propped-up painting of a yogi-type howling at a cloud, incense burning below him in a blue cereal bowl. The air was hot and swirled with incense smoke, and the sound (not quite music) pulsed and droned and throbbed. The subtle pitch changes penetrated to my core.


The Dream House, conceived by composer La Monte Young and visual artist Marian Zazeela, has inhabited this space since 1993. The duo describes it as “a time installation measured by a setting of continuous frequencies in sound and light,” which is hard to conceive of until you are in it. It’s sort of like being inside an electrical outlet where a rave and a meditation session are taking place simultaneously. The sound, which Young created using a Rayna synthesizer, consists of a constellation of thirty-one frequencies that create unique intervals. “[It is] highly unlikely that anyone has ever heard them or perhaps even imagined the feelings they create,” he notes in the installation’s press release. 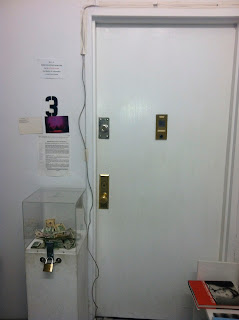 Not wanting to disturb the couple, I retreated down a neon-lit hall to a second, smaller room. As I moved through the space, the sound changed, becoming shrill with a pounding undertone, sort of like being on a motorboat bouncing across waves. I felt lugubrious yet weightless. I sat on a pillow and contemplated the illuminated shadowbox hanging on the wall before me.

After waiting a tactful few minutes, I made my way back to the main room. The guy was now seated in the lotus position on a pillow, pressing his finger to his third eye. The girl, in a yoga posture, stretched her arms toward four comma-shaped mobiles, which, illuminated by theater lights fitted with gels, cast luminous red and blue shadows on the walls. Then she dropped to the floor and began to crawl down the neon hall. The guy pressed his hands together in prayer, bowed, then reclined on a pillow, gazing at the ceiling. Nothing moved, not even the mobiles.
When I stepped onto the sidewalk, an incense perfume seemed to permeate the air and my ears tuned in to frequencies I wouldn’t have noticed otherwise: the snores of a Verizon truck intubated to a manhole, the hum of vacant subway tracks, the fuzzy sub-beat of a fellow passenger’s headphones, a distant, sourceless harmonica. 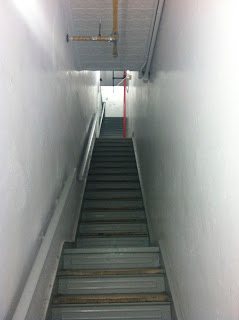