In the heat of an urban summer, many New Yorkers associate salt with sea breezes at Far Rockaway or the sparkling rime on the edge of a frozen margarita glass. But if you’re searching for a respite from tawdry city beaches and rooftop bars, look no farther than this Midtown office building, in whose basement lurks a faux cave lined with twenty-four thousand pounds of Himalayan salt, which, for about half an hour, you can have all to yourself. What could be a more suitable antidote to the city’s warm-weather hordes than a solitary subterranean salty beach, complete with deck chairs? 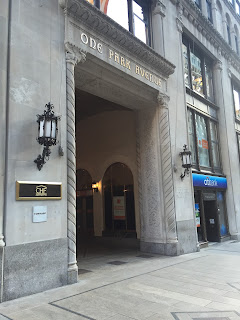 The salt cave is located on the lower level of One Park Avenue, within Oasis Day Spa, and is operated by a private company called Breathe Salt Rooms. Halotherapy (halo means “salt” or “the sea” in Greek) is an ancient treatment originating in Eastern Europe, where salt-mine workers were found to have increased vitality. Naturally antibacterial and anti-imflammatory, salt is believed to release negative ions that promote overall wellness and create a feeling of clarity. People also use salt rooms to detoxify their their respiratory system, heal their skin, increase energy, and relieve stress. 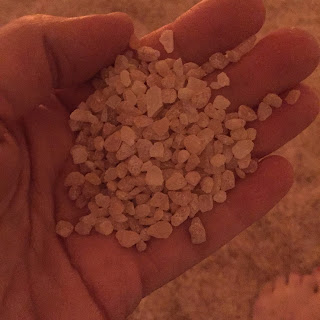 I was initially surprised that I was invited to enter the salt room in my street clothes; it seemed that a light robe would permit more contact with the beneficial ions. The “cave” was a spacious room carpeted in a few inches of pink salt, and some of the walls were constructed of luminous salt bricks. Beach chairs and yoga blankets were scattered about, and salt crystal lamps on the floor created a soothing, candlelit effect. 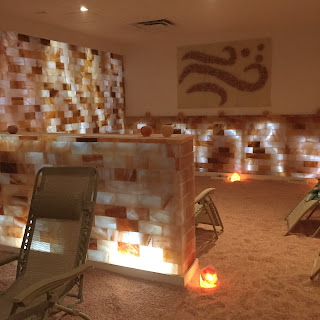 My bare feet crunched over the coarse grains, which sifted between my toes and felt at once cool and astringent. 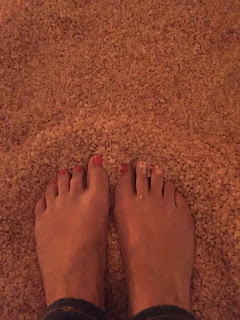 A pleasant fragrance hung in the air, like the dregs of a scented candle. The bricks glowed with otherworldly fissures and striations. 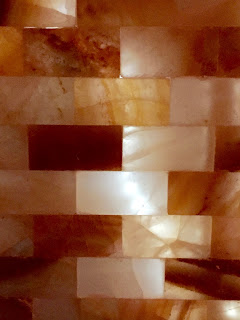 I settled into one of the chairs and spread a yoga blanket over my lap. The lights dimmed and the halo-generator began to whir, a bit distractingly: silence would have improved the experience. The briny air settled on my tongue, and I felt like my sinuses and lungs were cleansed with each breath. A photo taken with a flash reveals the salt particles suspended like mist in the room. 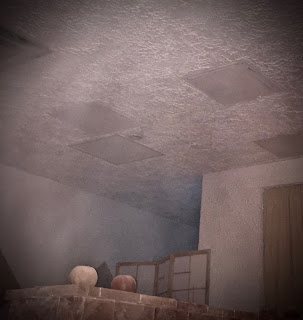 I plucked up a grain of salt and let it dissolve in my mouth: it tasted sweet and tangy without the slightest harshness. I couldn’t resist licking one of the bricks as well (salt is, after all, naturally antibacterial). It was cool and smooth and melted away like the top layer of an ice cube. I felt at once relaxed and energized. 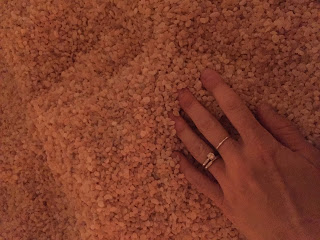 I closed my eyes and let the salt air envelop me. With the granules sifting beneath my toes, if I imagined the whirring of the halo-generator was the lapping of the waves and the mist a sea breeze, I could transport myself out of the Midown basement to Far Rockaway.
When I emerged onto the street half an hour later, instead of the hazy lull and sticky skin of a beach day, I felt cleaner and clearer. And when I reached into my pocket, instead of finding dregs of gritty sand, I found a single grain of pure salt that had found its way from a cave halfway around the world to a cave in the heart of our pulsing summer city. 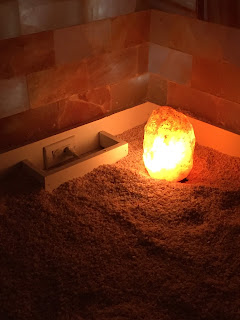 0 thoughts on “MULTISENSORY: A subterranean salt cave in Midtown”