Following weeks of debate over new security measures aimed at curbing violence, Brooklyn’s much scrutinized 2017 J’Ouvert celebration thankfully took place without incident. But New Yorkers might have missed this news amidst the plethora of media stories incorrectly attributing criminal activity to the event. “Bullets fly at J’Ouvert: Bloodshed despite changes” barked the September 5 headline of the New York Post. Even the New York Times and the Daily News, publications that tend to be friendlier to Brooklyn’s black Caribbean community, felt obligated to list several shootings that occurred over Labor Day morning and afternoon. It seems that any violent crimes committed during the holiday weekend in central Brooklyn are now routinely linked to J’Ouvert and Carnival. 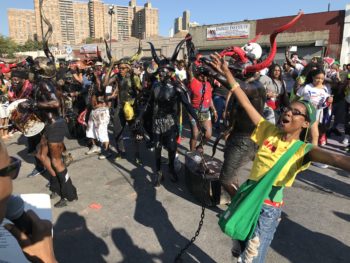 A close read of the reports, however, reveals that none of those unfortunate episodes were actually associated with J’ouvert—all occurred blocks away, before or after the event. The Post’s recounting of a shooting in Crown Heights took place at 5am, an hour before the J’Ouvert procession began, and more than two miles from the start of the parade route. The real news is that there was no reprise of the deadly shootings that tarnished the event in the previous two years.

Decisions to move the start time up from 4 a.m. to 6 a.m., along with increased police security, metal detector check points, and a no-alcohol policy, came as a result of intense negotiations among the event’s organizers, J’Ouvert City International led by President Yvette Rennie, the NYC Mayor’s Office, and the NYPD. These measures may have been responsible for a more peaceful J’Ouvert, but, as many participants asked, at what cost? The loss of the magical darkness to dawn transition, which could only be experienced with the traditional 4am start, was troubling for some. Odie Franklin, arranger for the Despers USA steelband that chose not to participate in J’ouvert this year, complained that the later time start “dishonored” the tradition of the culture. Michael Manswell of the Pagwah mas band was appalled that costumed members of his group had to be individually wanded and seemingly treated as potential criminals before entering the parade area. Many others felt that the excessive security created a police state atmosphere that stifled the spirit of the celebration. Had this year’s J’Ouvert, as the Times reported, been “sapped of its usual energy”?

Not completely. The crowd might have been slightly smaller than in past years, but there was no shortage of exuberant art and play on the streets. Fourteen masquerade bands, eight steelbands, and six rhythm bands participated in the JCI-organized competitions along the route. And there were hundreds, perhaps a few thousand, of revelers who had donned home-made, raggedy costumes accented with paint and powder. There were sightings of oil-drenched jab jab devils, mysterious midnight robbers, cross-dressing Dame Lorraine figures, and other traditional ole mas characters that have been absent from the Eastern Parkway’s fancy mas for decades. The Oil Downeres band lampooned Trump and his wall with a mas titled “Dey Showing Their True Colors.” Crowds thronged around Radoes, Pan Evolution, and the other steelbands. They wined and sang along in a high-spirited pan-on-the-road performance, another Carnival tradition that has been lost on the Parkway due to competition from deejays and mobile sound trucks. Those who played J’Ouvert mas and jumped up to the steelbands did so with unabashed enthusiasm.

Fortunately, the new security measures did not prevent the crowd from melding in with the musicians and masqueraders on the road. J’Ouvert, more than any other aspect of Carnival, has always been a participatory affair rather than a spectator sport. This in contrast to the big Eastern Parkway parade where metal barricades and police separate onlookers from the fancy mas bands and sound trucks. When what was once a participatory ritual becomes a presentational spectacle, something deep is lost. Brooklyn J’Ouvert, at least for the moment, has managed to maintain that core communal sensibility.

Now that this year’s J’Ouvert has come and gone, members of Brooklyn’s Carnival community must ask themselves some tough questions. Did the sunrise start and heavy police presence constitute a necessary price to pay for a safer J’Ouvert? Or was the original emancipation spirit of the pre-dawn celebration so deeply violated that many will opt out next year? As a non-Caribbean Brooklynite I’m not going to weigh in on that one, but as a folklorist I can offer some historic perspective. Ever since the first Afro-Trinidadians took to the streets of Port of Spain in the 1830s to celebrate their emancipation with dance/drum/masquerade processions known as camboulay (the precursor to J’Ouvert and what would become the opening of the pre-Lent Carnival), government and civil authorities have been trying to shut down, curtail, or control Carnival. In the early 1880s police clashes with bands of stick fighters led to the banning of drumming and stick fighting during Trinidad’s Carnival season. The ex-slaves responded by developing bamboo and metal percussion groups that eventually led to the emergence of the steelbands. Committees were formed to “improve” calypso lyrics in the 1920s by censoring the most lewd and offensive lyrical themes, but calypsonians continued to lampoon their colonial masters and compose ribald songs. British and American authorities cancelled Carnival during the WWII years, only to have it return stronger than ever in 1946 led by the newly constituted steelbands. Following 1962 independence, a national Panorama competition was established in part to move steelbands from the chaos of street Carnival to the more controlled environment of the Savannah stage. But many grassroots steelband men maintained their rebel persona and continued to aggressively dominate the streets during J’Ouvert.

Caribbean migrants established the first street Carnival in Harlem in 1947 only to see the event shut down in 1961 following a so-called “riot” that consisted of a handful of rock and bottle throwing incidents and an unlucky bystander being clubbed over the head with a steel pan. Carnival resurfaced in Brooklyn in the late 1960s, and came close to being shut down in 1991 following the Crown Heights riots. Over the years, the West Indian American Day Carnival Association and J’Ouvert City

International have faced a barrage of hostile coverage from the mainstream media that too often characterized their Eastern Parkway Parade and J’Ouvert celebration as violence-ridden, mob scenes that threatened public safety and order—not so dissimilar from the racially and class-tinged charges voiced by nineteenth century Trinidad papers that called for the dissolution of Carnival.

History tells us that J’Ouvert has been under attack since day one. This should come as no surprise, given the ritual’s legacy of celebrating liberation from tyranny, resisting colonial authority, and satirizing the rich and powerful. So, is Brooklyn J’Ouvert dead? I doubt it, especially in these current troubling times when standing up to xenophobia, racism, and class inequity has taken on new levels of immediacy for all American immigrant communities. J’Ouvert, with its spirit of resistance, has survived for over a century and a half, and there is no reason to suspect it won’t continue to do so. Of course, exactly what form it will assume next in Brooklyn remains to be seen. Stay tuned for J’Ouvert 2018.