I Am Not My Label! 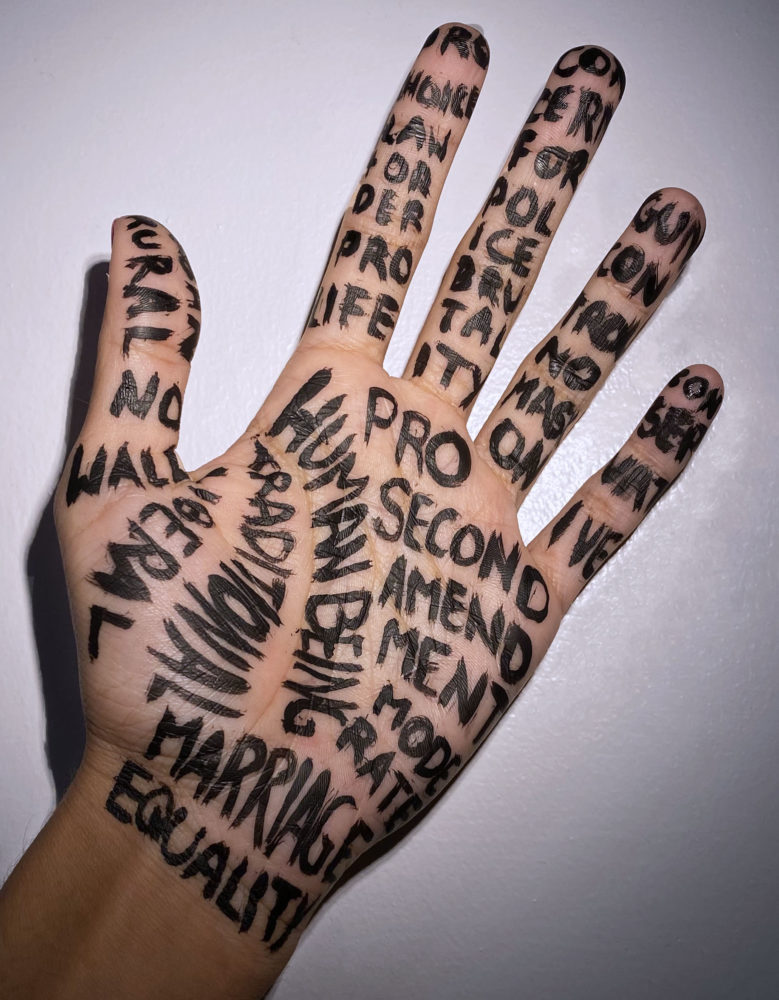 George Ella Lyon, former poet laureate of Kentucky and author of the widely influential poem “Where I’m From,” asks,  “Do we speak from the stances we take—or do we speak from a deeper place? Are we more than our labels?”

We all know about the Continental Divide,which separates the watersheds of the Pacific and Atlantic Oceans. But Across the Great Divide—the project we hope you will take part in—reaches across a human not a geographical barrier. Families and friends are divided politically as never before in our lifetime. Across the Great Divide aims to set aside labels and find a way for us all to talk and listen to one another again. Maybe it’s a crazy idea, but the stakes are high, and maybe this simple idea of a hand and a poem can spark some thoughtful conversation and, potentially, some positive change.

Our project begins with a hand like this one, reminding us of our most basic commonality: 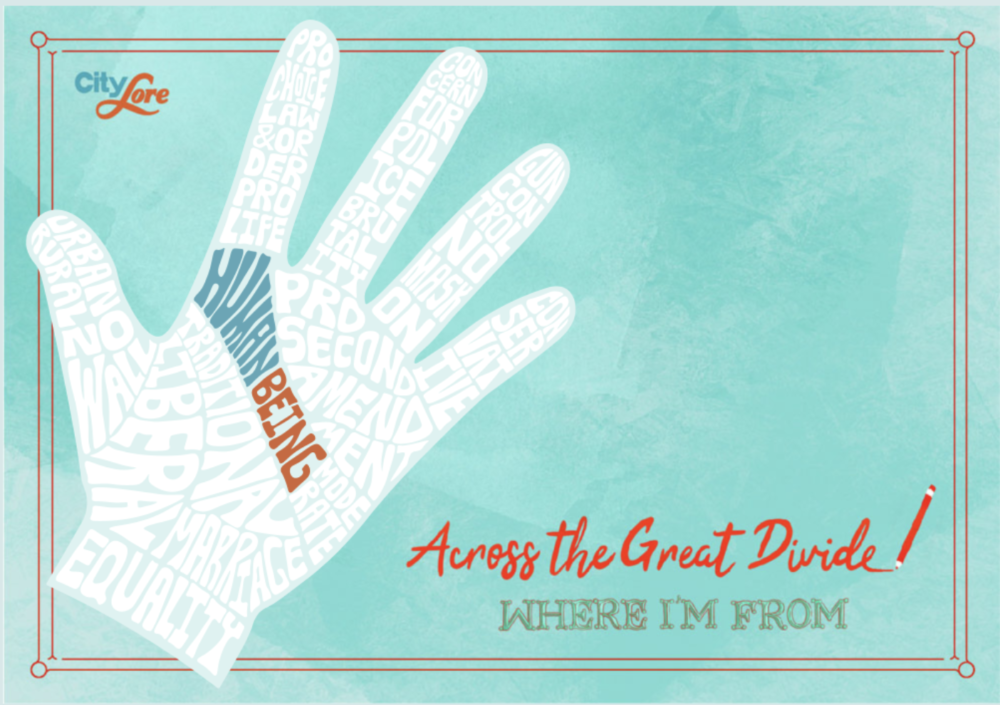 City Lore’s first foray with Across the Great Divide was the last ride for our old POEMobile, a brightly painted, poem-bedecked art truck that projected poems onto walls and buildings in New York City neighborhoods.The first POEMobile was a 1988 Chevy step van that was mechanically unsound and unsafe to drive. We had just received a new minibus for the POEMobile from New York City’s Department of Cultural Affairs, and we brought the old one to be junked at a truck repair shop in Yonkers. When we arrived, we asked if we could talk with the owners John and Kieran about Across the Great Divide. John met us at the door of the shop wearing a Trump mask, and we knew that we had come to the right place for the project.  On a large sheet of paper, Kieran filled out their hands like this: 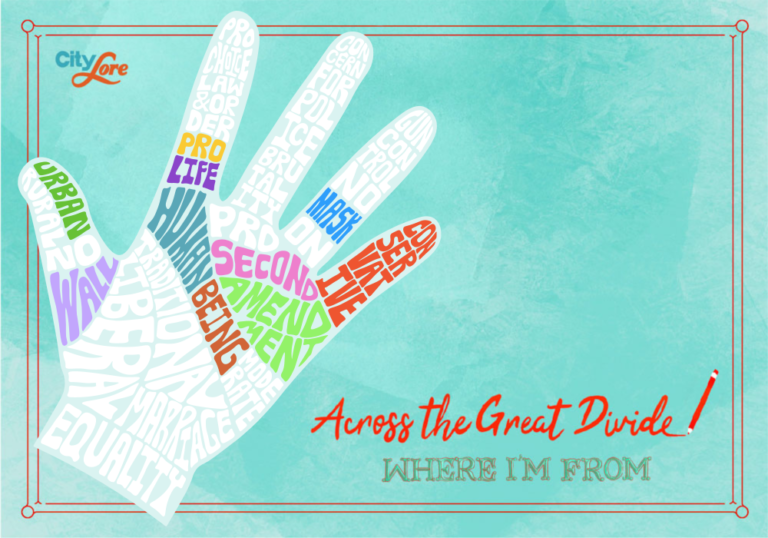 But Kieran’s poem demonstrated far more complexity than his chosen hand colorings suggest, and we left with a new appreciation for him. 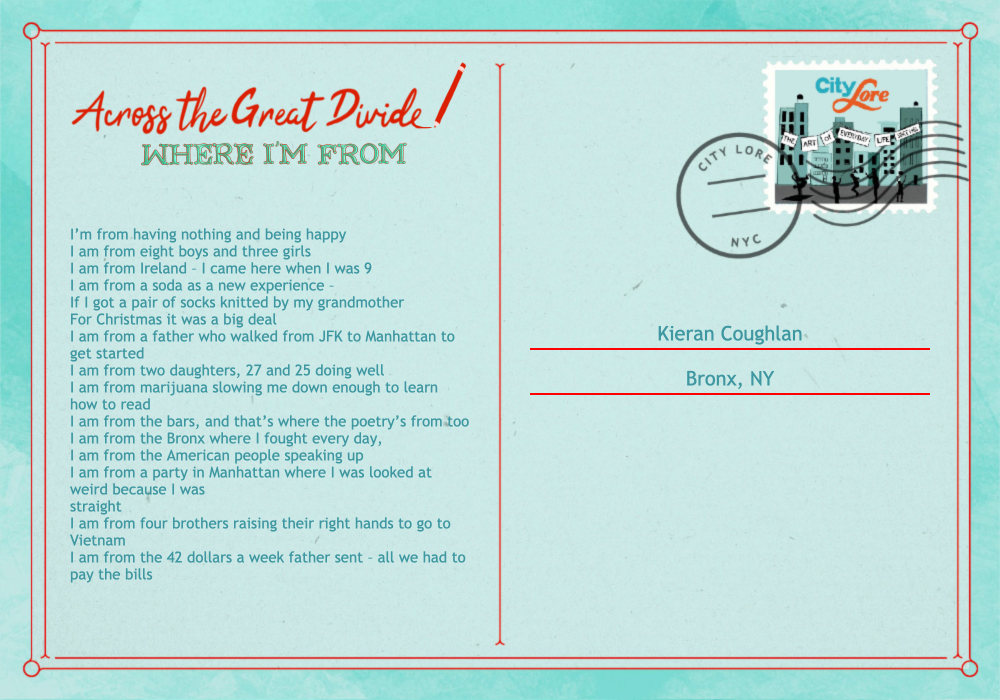 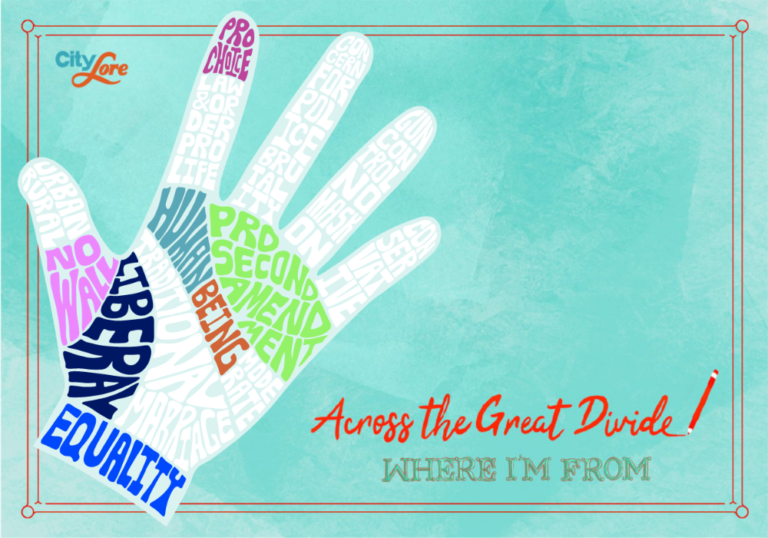 Victoria, a conservative, writes “I’m from Christians who don’t talk about their faith, but somehow I’ve developed a strong one that enables me, when I shut up, to see the light of God in strangers.” Devon, who filled out the conservative hand below is “from a small town where we know our neighbors’ names.”

The multicolored hands like this one often suggest the complexities of even our labels. Hannah Thompson from South Carolina colors in “liberal” and is also a Second Amendment advocate. Her poem suggests that she is much more than either one:

I’m from Scotland, from Holland, from down a dirt road in Mechanicsville
I’m from homemade macaroni and layered chocolate cake.
From the aunt who taught eighth grade English for twenty years
From the uncle who drove out west to meet the Sioux.
I’m from the wall of pictures in unmarked frames
Holding us together through time and space.

George Ella’s “Where I’m From” poem and widely-used writing prompt came from her childhood memories of growing up in Harlan, Kentucky where her parents owned a dry cleaning store. “I am from clothespins,” she writes, “from Clorox and carbon tetrachloride. / I am from the dirt under the back porch… /

I’m from the know-it-alls
and the pass-it-ons.
from Perk up! and Pipe down!

Her poem has almost magical powers. By letting us see resonant details of her childhood, it expresses the ineffable in all of us.  Steve’s daughter, Eliza, suggests that a person’s “Where I’m From” poem captures the images that may flash before their eyes just before they die. As we stare one another down across the Great Divide, it’s important to remember that it’s not “an eye for an eye,” but an I for an I.

The folklorist Troyd Geist uses the poem as part of his Art for Life Program for seniors in Rugby, North Dakota.  He wrote to us about an elder whose poem began “I am from an iron and Ironing board.” When she passed away a few months later her funeral was centered around that poem. In the front of the church, her photo was prominently displayed on an ironing board draped with doilies, alongside her iron and her bright red urn.

“Where I’m From” poems also help us understand not only our political stances but the many different and distinctive cultural backgrounds Americans are coming from. Sahar Muradi describes her childhood:

I am from the burnt bottom of the rice pot
From Shabnam and Jawad and Yusuf
Who was born Alan or Alan who was born Yusuf
I am from padar’s purple prayer rug
And Bobo’s henna-dyed hair rusting on her head
I am from Two Boots Pizza next to Dollar Pizza
Next to Joe’s Slice
I am from “fear your God” and “obey your parents”
From “Nowruz Mubarak” on the first day of spring
I am from the cry of a baby, pink and just born
And the long-necked trees that throw shadows on my wall

A number of poems were submitted by formerly incarcerated women who participate in a program called Beyond the Bars. This one is by Roslyn Smith:

I am from my warrior mother’s womb, an ancestry of North Carolina slavery that migrated to Brooklyn, New York.

I am from behind the concrete barbed-wire wall of the prison industrial complex, free but still not free.

Jonel Beauvais, also writing from Beyond the Bars, expresses her Native upbringing:

I am from the land where the partridge drums
The original steward to the land
I am the one who is carrying the Creator’s footprints
I am the daughter who stayed till the end
I am the mother who kept her promise
I am the sister you feel safe with
I am the partner that loves you unconditionally
I am the friend that always has your back
I am the speaker of a million tears
I am one phone call away
I am asking for prayers
I am asking for presence
I am the women I admire
I am the woman I’d never thought I’d be…
But here I am!

City Lore recently began talking with the nonprofit Braver Angels, which runs nonpartisan workshops for Democrats and Republicans. With more than seventy-five thousand members nationwide, it takes a different but complementary approach to Across the Great Divide. While we encourage you to go beyond politics to the deeply shared personal details of your life, Braver Angels encourages its members to confront political issues directly. Its workshops often begin by separating Reds and Blues and asking each group to discuss what they think the other group thinks of them. In the facilitated discussions that follow, stereotypes of both groups are broken down. The focus is not so much on what the two groups believe, but on why they believe what they do.  Like City Lore’s Across the Great Divide, Braver Angels encourages participants to move beyond their labels. Braver Angels is easy to join, and runs general Red/Blue workshops on Zoom as well as single issue sessions on a variety of issues including climate change and race, even one that focuses on divided families.

Our capitalist society reinforces and encourages labels to more easily home in on our demographics and sell things to us, ­beginning with the news we like to watch as a “liberal” or “conservative,” and going on to pigeonhole our tastes in every facet of our lives. The poem is a way to express that no one else in this world is from the same place you are. They say that God is in the details—so are you.

If you’ve read this far, you are a likely candidate to join the many others who are stepping up to unite our United States! So now it’s your turn. Across the Great Divide is a way of communicating with those you may disagree with by offering an olive branch—a creative, personalized insight into yourself—to someone you know with different political beliefs. You can, of course, also send postcards to people you agree with. Have fun and help us Cross the Great Divide!

How does it work? IT’S EASY! Click on the link below

Be as creative as you can in coloring in the digital hand with your viewpoints. Fill out the hand with a few mouse clicks, using the colors you want to fill in the words that represent your social views and political beliefs. One participant had fun with the model and colored in all the words, however contradictory. 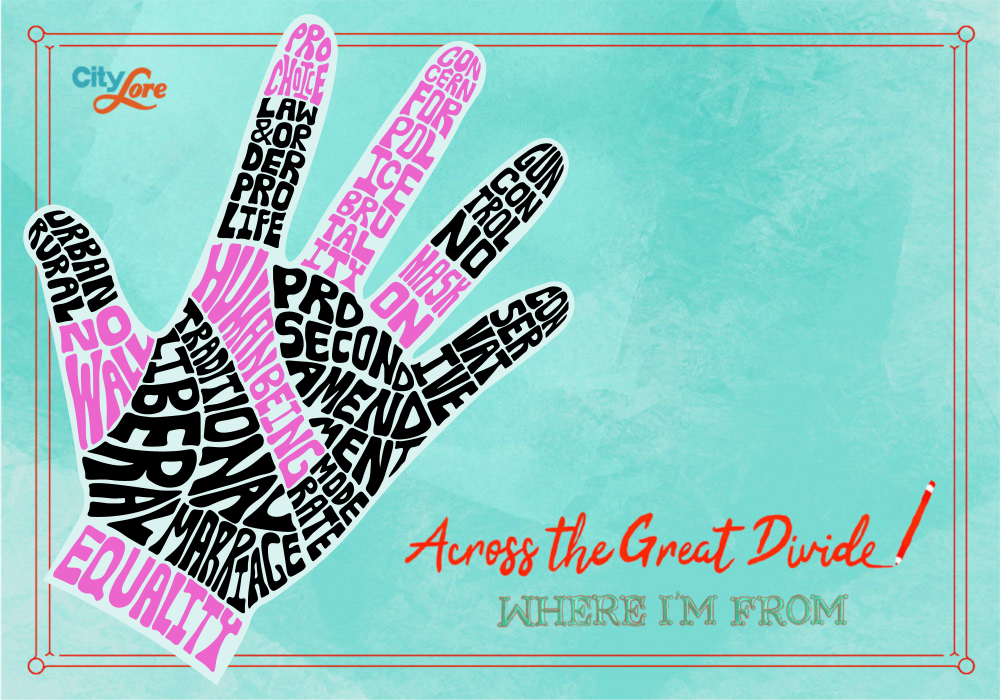 You’ll see the word “poem” when you flip the card over. DO NOT BE INTIMIDATED! Just draw on your memories and start a few lines with “I am from. . .” and go from there. There are no mistakes. If you’d like to read your poem at an Across the Great Divide open mic, please join us on May 10th at 7:00 pm. Learn more here.

Some respondents have no trouble dashing off a few lines to create their poems. If you are having trouble getting started, you can set up a simple phone or Zoom interview with one of our resident poets and get some assistance. We then send you a poem based on what you said, for you to edit. Write us at acrossthegreatdivide@citylore.org if you want to take advantage of this option.

The next step may be the most important: whom you send your postcard to. You can send it to anyone, but you may want to reach across the aisle, start a conversation with someone you think might fill the hand out differently from yourself. You may want to send them a separate email urging them to participate and then have them send their card back to you.

If you need more detailed instructions, visit our FAQ page or email us at acrossthegreatdivide@citylore.org.

As Jayne Wallace, who filled out her hand as a liberal from Florida, wrote in her poem,

I am from ordinary people with extraordinary dreams, some realized, some not.
I am a regular American who knows we can do better.

And as John Henin, who is all for the wall, law and order, and traditional marriage, wrote,

I’m for what this country needs
I am for something working
If this poem can work, I’m for poetry