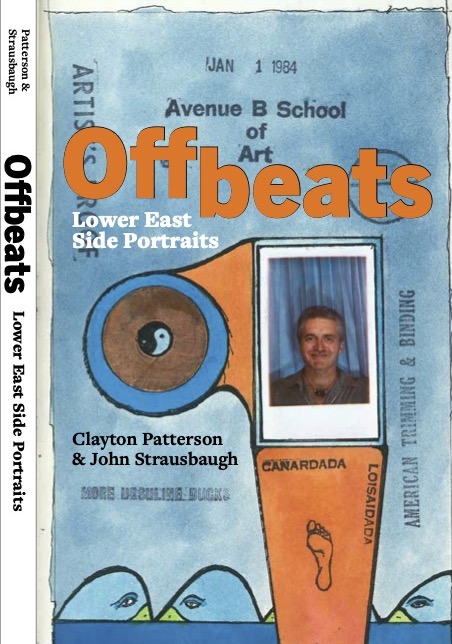 Join us at City Lore Gallery on Monday, July 11th for the launch of Offbeats: Lower East Side Portraits, a new book by artist/documentarian Clayton Patterson and writer John Strausbaugh!

The Lower East Side has been and continues to be home to many extraordinary people—artists, mystics, radicals, criminals, exiles, and immigrants. They have given the neighborhood a character and culture unique in all the world.

Published in June 2022 by Cool Grove Press, Offbeats is a textual homage to a selection of the Lower East Side’s creative and sometimes controversial characters, including visual artists Boris Lurie and Mosaic Man Jim Power, actress Molly Picon, and psychedelic spiritualist R.O. Tyler aka “Dr. Uranian,” and cultural crucibles, like the Pyramid Club and the cradle of Hollywood.

On July 11th, Clayton and John will discuss a few of their favorites Lower East Siders.

Free, but space is limited, so be sure to register here.

Hard copies of Offbeats will be available for purchase on site for $20 (cash only).

John Strausbaugh has been writing about New York City history and culture for more than thirty years. From 1988 through 2002 he edited and wrote for the weekly newspaper New York Press. In 2007/8 he wrote and hosted the “Weekend Explorer” series of neighborhood articles and videos for the New York Times. He has also written for the Washington Post, the Wilson Quarterly, Evergreen Review, and the National Review. His books about New York City history include The Village, City of Sedition, and Victory City.