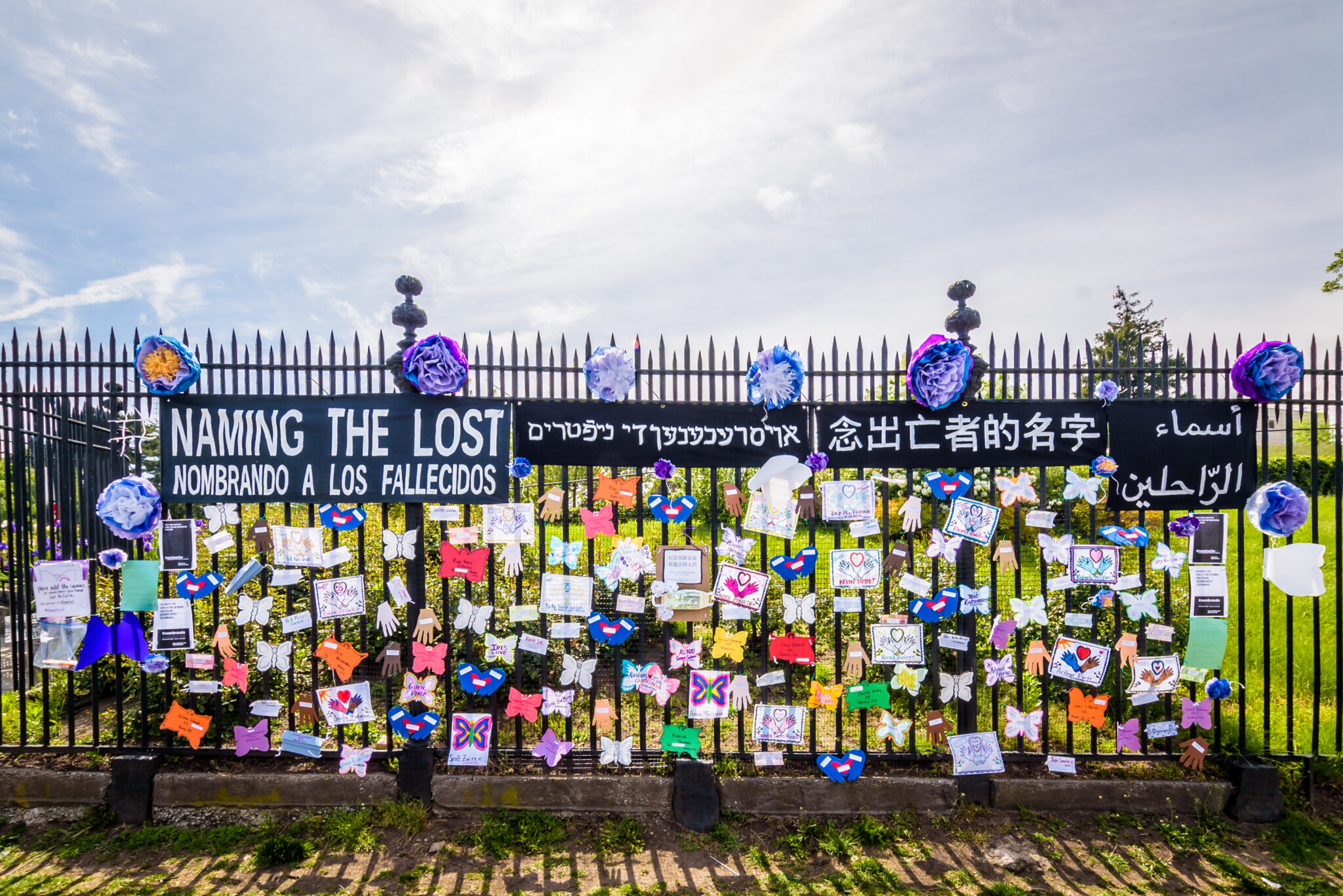 First Memorial Set for May 4, 2023 at Green-Wood Cemetery as part of Month-Long Memorial Display

Supported by a Major Grant from the Mellon Foundation

In May of 2020, when the Covid pandemic first terrified New York City, with over a thousand New Yorkers dying each day, a group of intrepid folklorists, artists and cultural activists voluntarily took to the streets ignoring the dangers.  Calling their effort, NAMING THE LOST Memorials (NTLM) their goal was to encourage mourners who had just lost loved ones without so much as a farewell hospital visit or a funeral service to create homegrown memorials in a public setting.  Over Memorial Day weekend 2020, participatory public memorial sites were set up in all five boroughs, and continued to be organized through June 2021, when they were displayed along the fence at Green-Wood Cemetery in Brooklyn.

The Mellon Foundation has now announced a major award that will allow three additional years of support to create these grassroots memorials, sponsored by City Lore and NTLM and their partners Mano a Mano: Mexican Culture Without Borders; Great Small Works; and Green-Wood Cemetery. The New-York Historical Society will acquire selected memorials both from the first two years of the pandemic, and the three years of the project.

The first new Naming The Lost memorial is scheduled to open at Green-Wood Cemetery on May 4, 2023 with a display of memorials and a ceremony including performances and prayers. The month-long display of memorials lining the fence along the Fifth Ave main entrance of Green-Wood will be on view and can be used as a spontaneous mourning site until the end of May.  October programs will follow as part of Mano a Mano’s widely attended Día de Muertos (Day of the Dead) memorials at St. Mark’s Church-in -the-Bowery. Selected artifacts of these ephemeral memorials will be archived at the New-York Historical Society for future exhibitions, public access, and research into the impact of the pandemic. Documentation of the memorials will also become part of an updated, interactive NTLM website where key elements will be translated into Spanish, Yiddish and Bengali, among others. To make the memorials, NTLM will enlist and collaborate with a total of forty different community groups whose constituents have suffered significant losses from Covid. Previous participants have included groups such as Mixteca Mexican Community Organization, La Troupe Makandal (Haitian), Hebrew Tabernacle, JouvayFest Collective, and Flushing Town Hall.

“The pandemic destroyed the social fabric of daily life, especially in the city’s most disadvantaged communities,” says Kay Turner, the project’s lead consultant and an early project organizer.  “As a direct response to that devastation, we developed NAMING THE LOST Memorials. While permanent monuments tend to be erected in a top-down process, the ephemeral memorials of our project place the memorial creation in the hands of mourners, kin, neighbors, and strangers alike. This kind of important folk process may frequently go unheeded, but it is a living and longstanding tradition that has evolved over time to meet the needs of the grief-stricken.” NTLM also plans a series of educational lectures and workshops on the history and meaning of ephemeral memorials.

Elena Martínez, the project co-director and City Lore’s staff folklorist, adds “Though ephemeral in their immediate use, these memorials, when documented by professional photographers, made accessible on the web, and institutionally accessioned for future displays by a major museum, acquire the same kind of permanence as memorials made of stone.”  The Project Team for NAMING THE LOST Memorials includes co-directors, activist Megan Paradis Hanley and folklorist Elena Martínez; lead consultant Kay Turner, folklorist and performer; Mano a Mano’s Director, Juan Aguirre; artist Jenny Romaine from Great Small Works; Cofounder of JouvayFest Collective and our lead community liaison, Sandra A. M. Bell; and City Lore Co-Directors Steve Zeitlin and Molly Garfinkel.

New-York Historical’s President & CEO, Louise Mirrer, writes, “At the New-York Historical Society, we’ve been collecting history as it happens for decades as part of our History Response initiative. During the pandemic, our staff was on the ground gathering objects, artwork, diaries, and other ephemera that documented experiences of everyday New Yorkers living in unprecedented times. We’re proud to join the NAMING THE LOST Memorials to continue this important work.”

Following two years of the deadly virus, NAMING THE LOST Memorials offers New Yorkers an opportunity to collectively channel unexpressed grief from a pandemic which shredded the social fabric of daily life. Those interested in learning more about the project or downloading materials to make their own memorial can visit namingthelost.com/memorials .

City Lore is New York’s center for urban folk culture.  In the earliest days of the pandemic, City Lore launched Touching Hearts Not Hands a call for creative responses to the developing situation. From the moment the call went out in March 2022, this project took as its goal to document and preserve the folk culture that has developed in response the COVID-19 epidemic, collecting hundreds of songs, poems, videos, images of signs from shop windows and other material. At around the same time, Martínez started to document and organize with NAMING THE LOST Memorials, with City Lore hiring photographers to document the memorials and professionally archiving them. Both projects echo the major cultural initiative that City Lore organized around the September 11th memorials that cropped up around the City. That work culminated in an exhibit curated for the New-York Historical Society in 2002 for which the physical memorials in the exhibit were acquired by the New-York Historical, and have become a major archival resource for researchers, writers and others studying that period.

Great Small Works visual theater collective was founded in NYC in 1995 to keep theater at the heart of social life. The company draws on puppet, avant-garde and popular theater traditions to tell contemporary stories. We perform in theaters, schools, parks, libraries, museums, prisons, street corners and other public spaces, producing work on many scales, from gigantic outdoor spectacles with scores of volunteers to miniature shows in living rooms. On any scale Great Small Works productions seek to renew, cultivate and strengthen the spirits of their audiences, believing in theater as a model for participating in democracy.

Green-Wood is a living cemetery that brings people closer to the world as it is and was, by memorializing the dead and bringing to life the art, history, and natural beauty of New York City. Founded in 1838 and now a National Historic Landmark, Green-Wood was one of the first rural cemeteries in America. By the early 1860s, it had earned an international reputation for its magnificent beauty and became the prestigious place to be buried, attracting 500,000 visitors a year, second only to Niagara Falls as the nation’s greatest tourist attraction. Crowds flocked there to enjoy family outings, carriage rides, and sculpture viewing in the finest of first generation American landscapes. Green-Wood’s popularity helped inspire the creation of public parks, including New York City’s Central and Prospect Parks.

Mano a Mano: Mexican Culture Without Borders is a New York-based non-profit organization 501(c)(3) dedicated to celebrating Mexican culture and promoting the understanding of Mexican traditions through arts, culture, humanities, and annual celebrations of holidays.

The Andrew W. Mellon Foundation is the nation’s largest supporter of the arts and humanities. Since 1969, the Foundation has been guided by its core belief that the humanities and arts are essential to human understanding. The Foundation believes that the arts and humanities are where we express our complex humanity, and that everyone deserves the beauty, transcendence, and freedom that can be found there. Through our grants, we seek to build just communities enriched by meaning and empowered by critical thinking, where ideas and imagination can thrive. Learn more at mellon.org.

At the New-York Historical Society, New York’s first museum, visitors experience 400 years of history through groundbreaking exhibitions, immersive films, and thought-provoking conversations among renowned historians and public figures. A great destination for history since 1804, the Museum and the Patricia D. Klingenstein Library convey the stories of the city and nation’s diverse populations, expanding our understanding of who we are as Americans and how we came to be. Ever-rising to the challenge of bringing little or unknown histories to light, New-York Historical will soon inaugurate a new annex housing its Academy for American Democracy as well as the American LGBTQ+ Museum. These latest efforts to help forge the future by documenting the past join New-York Historical’s DiMenna Children’s History Museum and Center for Women’s History. Digital exhibitions, apps, and our For the Ages podcast make it possible for visitors everywhere to dive more deeply into history. Connect with us at nyhistory.org or at @nyhistory on Facebook, Twitter, Instagram, YouTube, and Tumblr.