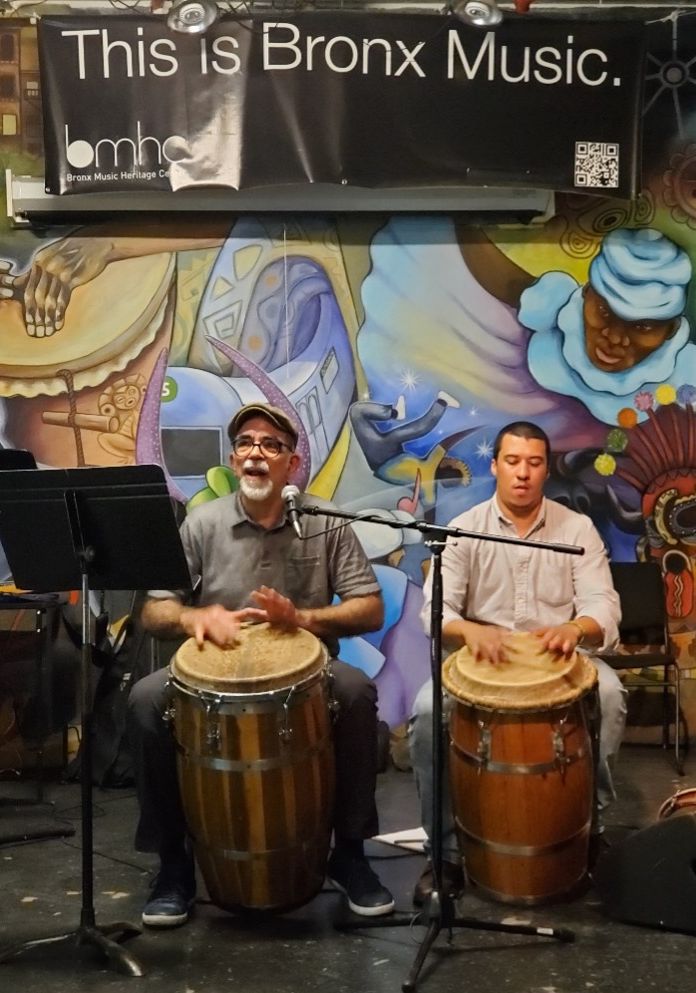 2/5 train to Freeman Street (steps away from the subway)

Join us for an evening of lively music, dance, and conversation with members of New York’s legendary bomba and plena ensemble, Los Pleneros de la 21. Founded in 1983 by percussionist and educator Juan J. ‘Juango’ Gutiérrez and master plenero Marcial Reyes Arvelo, the group has been performing traditional, Afro-Puerto Rican music and dance in NYC and around the world for nearly forty years. In 2006 the ensemble received a Grammy nomination for their groundbreaking album with Smithsonian Folkways, Para Todos Ustedes. Listen to them here.
Our program will open with Gutiérrez and percussion instructor Nelson “Mateo” González reflecting on the history of bomba and plena in New York, and their organization’s efforts to educate and celebrate the venerable singing, drumming, and dancing traditions of Afro-Puerto Rican culture. Folklorist Elena Martínez of the Bronx Music Heritage Center and City Lore will join the conversation to recount the collaborations between Los Pleneros and public folklorists, with a special nod to the late Roberta Singer, who helped promote the group in its early years.
During the second half of our program Gutiérrez and González will be joined by current Los Pleneros musicians and dancers to demonstrate a variety of bomba and plena styles. Audience members will be invited to join in for a finale dance!
The program will be moderated by senior folklorist Ray Allen, who is co-coordinating the Community Conversations series with City Lore.
We look forward to seeing you on Thursday, September 8, at 7:00pm.
Nuyorican Bomba y Plena with Los Pleneros de la 21 is the second of a series of Community Artists Conversations between community artists and public folklorists. Our goal is to critically evaluate past efforts and to consider new directions for promoting grassroots creative traditions in our diverse metropolis. Stay tuned for other events on topics such as the steel drum and graffiti art in New York.