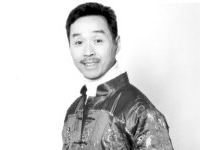 I am an immigrant from Taiwan. When I was in junior high school there, I failed math, science, chemistry, and could not pass the National High School Exam. Luckily for me, a new school called the National Academy of Arts was established. There were no math, science, or chemistry classes taught there. My parents helped me with my audition, and since I was interested in music, dance, theater, and cinema, I got in! When I was at the Academy, my grades were very good and I was one of the top three students in my class, so I got a full scholarship. My acting teacher cast me as the star in a very popular radio show (at that time in Taiwan, not many people had T.V.s) so I became quite popular and never had to ask my parents for an allowance. After graduating with honors, I won a 6-year movie contract, went to Hong Kong and became a film actor. During that time, Jacky Chan was my stuntman.

When I got tired of show business, I decided to go back to school, which was why I came to New York. When I arrived, I was not fluent in English and I couldn’t type, so doing all of my homework was quite a task.  However, difficult as it was, I managed, graduating with a Masters of Science degree in Education from Long Island University.

When I first came to New York, a talent agent wanted to sign a contract with me, and I was skeptical because, in those days, movie directors would cast a Hispanic actor to play an Asian role and say who’s going to know the difference? That’s why I never wanted to be a full-time actor in New York. Even so, I had a major role in Woody Allen’s “Hollywood Ending” and was nominated for an Emmy for “Due South”.  The independent films I acted in had brought me to Nepal and Iceland and the plays I directed were performed at Lincoln Center as well as Theater Festivals in Taipei as well as Venice and Sicily, Italy.  Despite these achievements, I am most proud of being a teaching artist with City Lore and creating meaningful and fun projects through performances that bring joy to the schools. If we had projects like these when I was little I never would have failed math.

What students and teachers say about Lu: