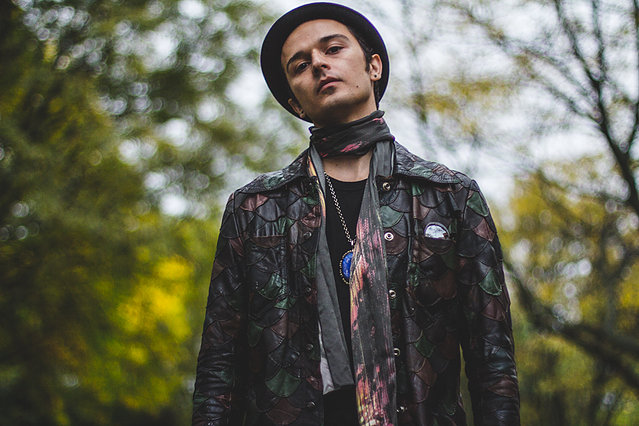 Kenneth Marez Jr. (Ken Fury) is an artist working in multiple mediums including, painting, jewelry, music, dance, poetry, photography, and filmmaking. He is from Pueblo, Colorado, descending from Native American (Genízaro, Puebloan) and Nuevomexicano/Hispano bloodlines from southern Colorado and New Mexico. His artistic vision explores nature’s duality – creation and destruction – and expands on multi-dimensional figurations, abstractions, and spaces derived from his dreams, subconscious, and life experiences. Love, mortality, transformation, eroticism, spirituality, and colonialism are some of the subjects that permeate Fury’s body of work. “My art is part of one expanding environment that focuses on stimulating all the senses. While also relying on intuition to create spontaneous works that attempt to pierce the core of emotion and spirit.”

Ken started painting at a young age, influenced by both of his parents, who are artists. His paintings focus on otherworldly scenes and emotions through the vibrancy of colors, shapes, and inter-dimensional characters. His sculptures take the form of jewelry, which is handmade using traditional metalsmithing techniques. Ken Fury started making jewelry in 2006; he is self-taught and graduated from Studio Jewelers Ltd. in Manhattan. His jewelry and artwork have been exhibited in art galleries, boutiques, and museums, including the Museum of Contemporary Native Arts in Santa Fe, New Mexico. Along with having his jewelry featured in publications, including VOGUE Paris.

His approach encompasses all his art forms, including dance. Ken started teaching himself how to dance at the age of eleven. After high school, he moved to New York City to pursue his art. He performed in theater productions while also street performing and studying with some of the pioneers in Breaking. Ken’s signature style has won him over 30 of the top Breaking competitions worldwide, along with being invited to judge many of the most significant dance events. He has performed at Central Park Summer Stage, Madison Square Garden, Kennedy Center, and The Smithsonian in Washington DC, and has choreographed and performed in films and commercials for Starburst, Toshiba, I love New York, K-Swiss, The Netflix series The Get Down, and more. Ken has taught his programs in schools and universities, including New York University’s TISCH School of the Arts and the Seoul Institute of the Arts. Ken also travels as a cultural ambassador sharing dance and art and has worked with the U.S. Department of State’s program Next Level, where he traveled to Zimbabwe, Africa. And American Voice’s where he taught at The Jakarta Institute of the Arts in Indonesia.

In 2010, Ken began his experiments in music. His inspiration was to merge his poetry and the images in his paintings to create a sonic space. Without prior musical training, he taught himself how to play multiple instruments. Using drum machines, vintage synthesizers, and guitars, he self-produced and released Flowers Fall Asleep (2012). Followed by Moonlight Bloom (2013), The Cry of Nature’s Birth (2016), and Rain over Clouds (2020). His music has elements of krautrock, post-punk, darkwave, hip hop, and industrial that influence his sound. He has performed at many of NYC’s premier music venues, such as the legendary Pyramid Club, Bowery Electric, Alphaville, and radio stations, including WFMU. Ken Fury directs the short films that accompany his songs. They have screened at film festivals, including the Portland Film Festival, Native Spirit Festival, Four Corners Film Festival, and the American Indian Film Festival.

In addition to leading his students in dance residencies, Ken also makes and sells his own jewelry and is the founder of the Breaking Institute of the Arts (B.I.A), a creative school of dance that encourages students to develop and embrace their own style of self through the artistic guidance of arts education.

What students and teachers say about Ken: