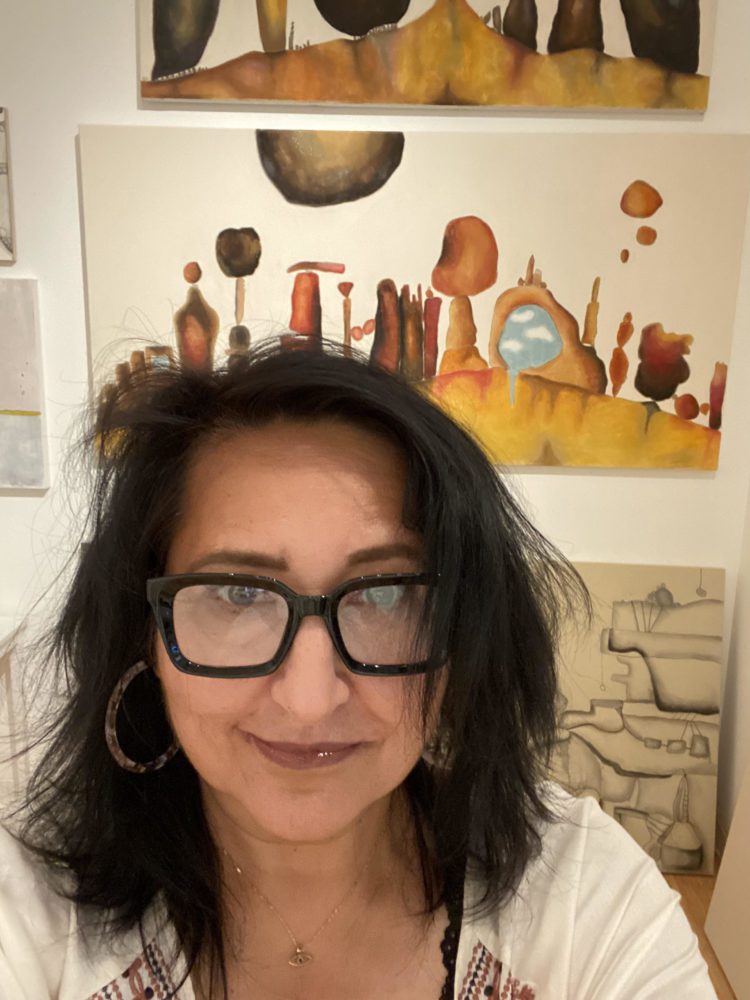 Haifa Bint-Kadi a first Generation Palestinian-Afro-Caribbean American, a daughter of refugees, a mother, a grandmother. She has kept every diary she ever wrote from 3rd grade until now. She finds the process of memory and remembrance fascinating and perplexing. Haifa was trained in Italy as a classical mosaicist, but even in her early work, she was always drawn to the idea of public art as an index or marker of lived experience.

Haifa  holds a B.A. and M.F.A. from Istituto d’Arte per il mosaico in Ravenna, Italy and has been designing and fabricating public art mosaics since 1993.  In 2010, she completed a sculpture park for the State of New York at Suny Oneonta. The sculptures symbolically represent Pangaea, the seven continents once being connected. The park includes 12 large structures with mosaic skin representing the weaving patterns of indigenous people from around the world and a solar light pathway throughout the Quad area. In 2012, Haifa completed The Eel’s Journey, a large-scale in-ground public art mosaic for the City of Yonkers’s daylighting of the Saw Mill River which serves as a focal point for Yonkers’ new development.  In 2014 Haifa received a commission from the Children’s Museum of Manhattan to design and create an installation for their 2014 Muslim Cultures exhibit. Most recently, the artist completed four sculptures for the new Greenway trail which connects Yonkers to the Bronx. Haifa is a full-time curator for the City of Yonkers library system and a certified teaching artist in public schools across the five boroughs and in Westchester County. Haifa has been an educator for the last twenty three years where she has been connecting and uplifting children and adults through my many community-wide art programs. As an adjunct professor at Suny Purchase, she teaches Arts for Social Justice and empower students to face history and disrupt systems built on oppression. Using historical archives as a reference, Haifa has created over 24 public art mosaic and steel sculptures across the state. With the intent to provide an exciting arts venue in the downtown of Yonkers, Haifa successfully founded the First Thursday Gallery Hop which partners with local galleries and businesses. She also maintains a studio practice grounded in family archives which are translated into paintings and mixed media-maps tracing the Afro-Caribbean and Arab roots of her family’s diaspora. Haifa has received numerous awards, grants and recognitions including the Kennedy Center’s Steam Educator Award, and given many workshops at venues including the Children’s Museum of Manhattan, the Asia Society, the Hudson River Museum and more. Haifa believes art is a form de-colonization and resistance against systematic racism as it heals, builds self-esteem and self-identity and evokes a sense of wonder and exploration in the world.

What students and teachers say about Haifa:

“Thank you to Ms.Haifa, our City Lore Teaching Artist, for sharing her talents, teaching us about the clave rhythms and how music and art are interconnected.”
— Ms. Marchesini and Class 3-303 at P.S. 69 in Jackson Heights, Queens